When they say the best things in life are expensive, clearly, they haven’t tried South Korea’s wide array of street food!

If you’re in South Korea for a vacation, not only will your jaw drop from its rich culture, fascinating bustling cities, and beautiful sceneries, but you’ll find yourself drooling on their boast-worthy food, especially street food!

If you’re traveling on a budget and high-end restaurants might not be on your itinerary, don’t worry a cent for Korea’s street food is worth more than it costs.

You’re in for a spicy treat with Tteokbokki, cylindrical rice cakes drowned and seasoned with chili sauce. It’s usually eaten alongside fish cakes, boiled eggs, and scallions. It’s chewy, spicy, and addicting all in one food.

Almost every food stall in South Korea sells Tteokbokki but they are mostly found in Myeongdong Street and Gwangjang Market. There’s also a Tteokbokki Town in Sindang, an area known for having the best Tteokbokki in Seoul.

Odeng is fish cake skewered in a stick and is best served with warm and delicious broth. It’s also another must-eat South Korean street food. It can also be eaten with chilies, gochujang, and green onion for a more filling meal.

Aside from that, you can also opt for a deep-friend Odeng, which is equally delicious, as well. It’s a great cure for hangovers and can be the most delicious food to have after a night of intense partying.

Like Tteokbokki, Odeng can also be found on numerous food stalls around the city.

No matter where you are in the world, the fried chicken and the beer combination will always have a special place in your heart. But it’s a bit more special in South Korea because this is no ordinary fried chicken. It’s spicy hot chicken and with every bite, it gets spicier.

When you buy it from stalls, you can have the option to top it with honey-mustard sauce. This will make the chili fried chicken more bearable. It will come in a cup and prices will vary depending on the cup size. Aside from beer, you can also pair it with french fries and rice cake.

Hotteok is pancake. But it’s not your ordinary pancake. It’s a stuffed pancake, meaning one bite will bring more than just one flavor of goodness.

The regular Hotteok is usually filled with cinnamon, dark brown sugar, and chopped peanuts. But you’ll also quickly find other savory fillings as well, such as kimchi, red bean paste, chocolate, and even bananas.

When you buy Hotteok in the streets of South Korea, expect them to be freshly cooked and hot on the bite.

Very similar to the Japanese treat Taiyaki, Bungeoppang is a fish-shaped bread, filled with sweet red bean paste. The batter is placed in a fish-shaped waffle iron and packed with the red bean paste filling and cooked until golden brown. It’s a sweet delicacy and is a nice dessert after a meal.

Aside from red bean paste, you can also deviate and have it filled with vanilla ice cream or chocolate.

Another must-eat in the list is Kimbap, made from cooked rice and a variety of ingredients rolled with a sheet of roasted seaweed. Vendors would usually have this cut into bite-sized pieces before serving.

The Best Korean Winter Food you must try

The most common ingredients of Kimbap are cooked white rice, spinach, eggs, carrot, imitation crab sticks, ham, and sesame seeds on top of the roll.

The ingredients can also vary. Instead of white rice, you can opt for brown rice, black rice, and other kinds of grain. The filling can vary too, with cucumber, cheese, beef, or kimchi.

Japchae is a classic and if you are a fan of noodles, definitely one you should try. Japchae is made by stir-frying dangmyeon, which are chewy glass noodles made of potato starch. The dish includes vegetables and different toppings such as eggs, carrots, mushrooms, spinach, and slices of beef.

It’s a savory dish and is also very common. You can find japchae in most food stalls in South Korea’s streets. Aside from that, it’s also food served during special occasions so it’s really impossible to miss it.

Jokbal is a South Korean street food that is made of pig’s trotters and cooked with soy sauce and spices. Some might not be too fond of the thought of eating pig’s trotters but it’s actually a very popular dish in South Korea.

It’s very greasy and is best eaten as ssam (wrapped in a piece of lettuce). Since it’s also considered a heavy meal, people usually eat it with a bottle of alcohol. It’s served in bite-sized pieces or you can eat it as a whole.

Another noodle dish on the list is Jajangmyeon, one of the most popular dishes. It’s everywhere! Korean dramas, Korean vlogs, Korean movies, everywhere.

It’s a noodle dish with chunjang (sweet bean sauce), pork and vegetable topping. Another variation of the dish is topped with seafood. It’s chewy and flavorful, and the closest comparison would be of spaghetti. 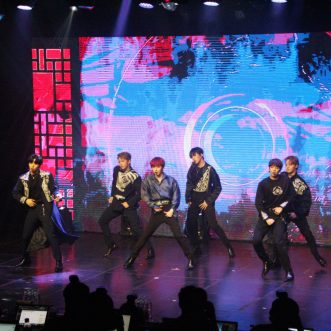